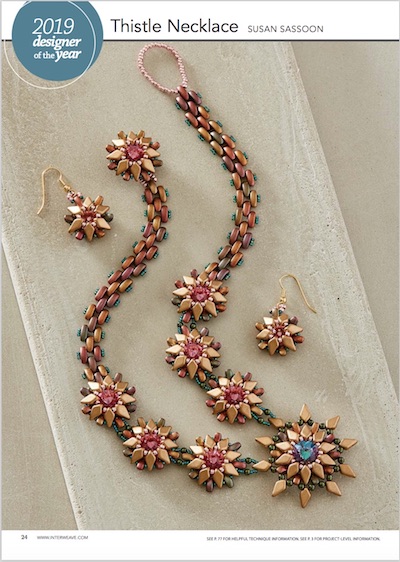 I’m so excited to have been chosen by Beadwork Magazine to be one of three Designers of the Year for 2019! It is a great honor, and one that I did not expect to achieve. I share this with fellow honorees Wendy Ellsworth and Vezsuzsi. I hope you’ll enjoy what we create this year along with Beadwork’s many other talented contributors.

As a Designer of the Year, I will be sharing the instructions to make one of my designs in each of this year’s six issues. The first (Feb/Mar) has already hit the press, and is available for purchase in print form or digital form at publisher Interweave’s website. In it, I present my Thistle Necklace. The design was inspired by the beautiful two-holed Kite beads and three-holed Cali beads that were sent to me by Beadsmith last year. As I played around with the beads, I found that they form very easy to make bezels that can be used to encase Swarovski rivoli crystals of all sizes.

Here’s what the components looked like on my bead mat as I worked on the design. Notice that some of them are open – without a rivoli inside them. Those were the first ones I made. Once I saw how pretty they looked open, I knew they would only be improved by adding some bling. Luckily, I had just the right color rivolis to add!

After making these components, I saw that Beadsmith came out with some new kite beads that had a laser-etched design on them. I fell in love with them and had to design something special with these. I used the same basic bezeled rivoli idea and made this necklace, bracelet and pendant.

The design also works well for Christmas as the design looks a lot like a Poinsettia when beaded with red kite beads. The tutorial for the bracelet includes the supplies needed to make it in either the laser-etched beads or the poinsettia beads.

As I just couldn’t get enough of these fun components, I played around with some variations of the open-holed components that I had originally created (I hate letting good beadwork go to waste). Here’s what I created with the open components.

I hope you enjoyed this bit of insight into my design process and I hope I’ve inspired you to create some lovely beadwork! Please share your thoughts and your beadwork in the comments.

This website uses cookies to improve your experience while you navigate through the website. Out of these, the cookies that are categorized as necessary are stored on your browser as they are essential for the working of basic functionalities of the website. We also use third-party cookies that help us analyze and understand how you use this website. These cookies will be stored in your browser only with your consent. You also have the option to opt-out of these cookies. But opting out of some of these cookies may affect your browsing experience.
Necessary Always Enabled
Necessary cookies are absolutely essential for the website to function properly. This category only includes cookies that ensures basic functionalities and security features of the website. These cookies do not store any personal information.
Non-necessary
Any cookies that may not be particularly necessary for the website to function and is used specifically to collect user personal data via analytics, ads, other embedded contents are termed as non-necessary cookies. It is mandatory to procure user consent prior to running these cookies on your website.
SAVE & ACCEPT
Loading Comments...